The goat, one of the first herd animals domesticated by man, has been used for its meat, fleece, hides and milk since ancient times.

Goats because they are comparatively small are ideal for breeding on smaller blocks where the options for earning a little extra income are often few, due to the limitations of space.

Five to seven head of goats can be run where one cow can be run. Goats can also help to control woody weeds such as blackberries and wattle.

Goat meat is the most widely eaten in the world and has no cultural or religious taboos and is a healthy addition to the diet due to its low cholesterol content when compared to mutton, beef or pork, as can be seen in the table below.

Goats in Australia
There are several million feral goats in Australia, mainly in the mulga scrublands of the inland and Australia has been exporting their carcasses, for many years. In recent years the demand for goat meat has grown rapidly particularly, for better quality carcasses. This demand has sparked a growth industry of on-farm bred goats mainly using South African Boer bucks over feral does to increase size, growth rate and muscling to supply the export and domestic markets. In 2006, Australian goat meat exports increased by 7% above 2005 levels to reach a record level of 19,519 tonnes. 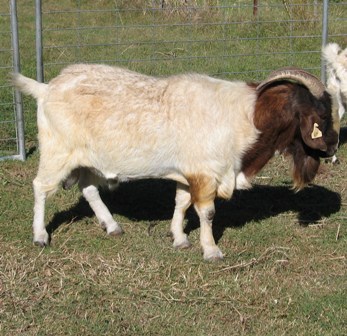 Boer buck, these have been crossed over Australia's feral goats to increase growth rates and muscling.

Marketing
If you are considering breeding goats for the meat market, before you invest your time and hard earned money, it is important to find out what markets are available for your finished product and their requirements. It’s no good having wonderful fat 18 months old goats weighing 40kg live weight for the Chevon market, if the market wants kids three months old weighing 16kg for the Capretto market.

Once you decide to go ahead and breed meat goats, before you buy your first stock, the fencing, handling facilities, water and available feed must be examined and improved if necessary. Goats can be kept almost anywhere but can suffer health problems if run in swampy areas.

Fencing
Cattle fencing is not suitable for goats as they will go straight through a barbed wire fence and be off to wherever their fancy takes them. However, a cattle fence can be easily adapted to contain goats by the addition of three plain wires. The first wire is an earth placed 75mm above ground level the next 2 wires, carrying a charge of not less than *5 kV (5,000 volts) supplied by a solar or mains powered energiser, are placed as follows: the first live wire is run half way between the earth and the first barbed wire and the second between the first and second barbed wires.

*Caution: do not run horses in a paddock with an electric fence running a voltage higher than 2.5 kV (2,500 volts) as it can seriously affect them and never energise barbed wire because it can be very dangerous to a child or elderly person if they become caught on it.

The type of fencing will depend on two things, the size of the block and of your bank account. On larger acreages, plain wire 6 strand electric fencing running on either a fence return system, where the wires are arranged as one negative one live alternately from ground to top or a bipolar system where all wires are live and carry either a negative or a positive charge, so that any wire touched will deliver a shock because the animal becomes the earth, are possibly the least expensive option. Amperage carried in the wires is low, so that it will sting, but will not usually cause any permanent harm.  One disadvantage of the bi-polar system is that vegetation touching the fence will earth it out.

If you are only keeping a few goats for your own supply then four 10’ (approx., 3m.) farm gates can be used as a small yard. Join three together and leave the fourth unjoined to use as the gate.  This enclosure can be used for drenching etc. When, trimming hooves, tether the goat to a gate. If running larger numbers portable yards can be bought. Similar to cattle yards, they have more bars set closer together. If you are handy with a welder or have timber available you could build your own.

Water
Clean fresh water must be freely available. In cooler weather goats drink as little as 2 Lt per day but in summer, adults or lactating does, may drink 10 litres or more. If water is too brackish (salty) or too hot or cold, goats will drink less and suffer because of this e.g. Does may reduce milk production or bucks develop urinary calculi.

Feed
Goats are browsing animals and if given free choice, will consume about 80% woody weeds and shrubbery and about 20% pasture. However, if good grazing is available they will probably only need this plus a mineral lick block available ad lib and clean fresh water. 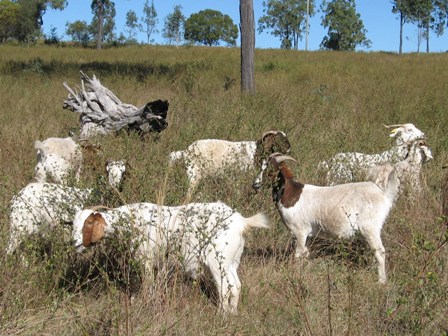 When breeding for the meat market a small supplement of corn, commercial goat mash or pellets at the rate of 125g per day for kids and 250g for adults can be given to increase growth rate. Introduce all new feeds gradually to avoid digestive problems. It can take several days for the goats rumenal bacteria to adapt to new feeds.

Health
Newly purchased stock should be quarantined for ten days, drenched for worms and vaccinated for:  tetanus, pulpy kidney and cheesy gland- we use Glanvac3 or Glanvac6.

Goats are prone to worms and should be drenched when necessary. Your vet can advise you about the forgoing.

Further information, on worms can be found in the article Worms in Sheep Cattle and Goats and their Management on Small Farms.

Want to Learn More About Farming Meat Goats?
The years that we have been involved in the industry have given us a lot of pleasure and fulfilment and admittedly, on occasion some frustrations. We hope that those of you who venture into meat goat breeding experience the same sense of achievement as we do whenever we see the fruits of our labour either going off to market or to stud duties on another property. Good luck and happy goat farming.