Pastures for Livestock on Small Farms

What Pastures Suit my Livestock?

Pastures used on small farms should match the environment (rainfall, elevation, temperature), soil type and livestock enterprise. If a farm has a number of livestock enterprises, pastures should match the predominant enterprise or a mix of pastures used that is suitable for all enterprises. Livestock feed requirements vary between species, age, class and fertility (pregnancy, milking, dry) status. For example: cattle are well suited to predominately grass based pasture as they have a higher fibre requirement.

Beef cattle are farmed on a wide variety of soil types and in varying climatic conditions, often on less fertile soils than dairy cattle. Cattle are easier on pastures than sheep as they use their tongue to tear plants rather than their teeth to gnaw. Cattle do not graze pastures as short as sheep as they are only capable of grazing to a height of 3-5cm, due to their grazing habit and mouth shape. Cattle are best suited to pastures with a high grass component. They have a higher fibre requirement than sheep and need larger amounts of feed.

There are a range of introduced grass species suited to cattle grazing, these include both temperate species (ryegrass, cocksfoot, phalaris, tall fescue and prairie grass) which are suited to southern Australia and tropical species (rhodes grass, digit grass, paspalum, kikuyu and panics) which are suited to northern Australia. High quality cattle pastures should ideally contain a proportion of legumes such as white/red clover, sub clover, lucerne and tropical legumes. The legume component of the pasture plays two roles: one is the supply of high quality feed with the second being the fixation of atmospheric nitrogen. The legume plant uses converted atmospheric nitrogen for its own growth with the remainder available for other grasses.

Legumes play an important role in any pasture mix. However, it is important to note that cattle pastures containing actively growing legumes or those that make up greater than 30% of the total pasture can increase the risk of bloat. Bloat oil and capsules are useful preventative tools that can be used during high risk periods of bloat (early spring), however these do not provide a long term solution. Some farmers with mixed (sheep, cattle) grazing enterprises, have found the use of the ‘leader follower’ grazing system to be helpful in managing bloat. This involves a grazing system where sheep are used initially to graze paddocks (eating most of the legumes on offer) before cattle are introduced. 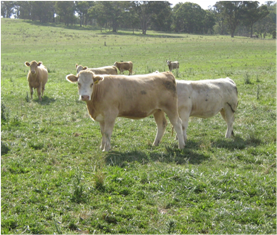 Sheep generally graze pastures lower than cattle as they gnaw at the pasture, are more selective than cattle and can overgraze pastures quickly. Pastures for sheep should consist of dense species due to their low grazing habit and because they are often set stocked (stay in the one paddock) for a period of time over lambing and joining.

The dominant introduced temperate grass species used for sheep grazing include cocksfoot, ryegrass, tall fescue and phalaris. In general tropical grasses tend to be not as well suited to sheep as temperate grasses, however there are some species including kikuyu, paspalum, rhodes, and digit grass that when well managed, can be useful. Sheep naturally prefer to eat a higher level of legumes than grasses; they also have a reduced risk of bloat compared to cattle. Ideally, sheep pastures should contain 30% grasses and 70% legumes. Sheep are also well suited to grazing herbs, including chicory and plantain. These species can tolerate hard grazing and make good companion species with other grasses and legumes.

Deer are farmed in small pockets around Australia. Deer are softer on pastures than sheep as they browse rather than gnaw. Deer growth and reproduction is dependent on seasonal conditions and day length so their requirement for high quality feed through winter is low, in comparison to cattle and sheep. Pastures that grow well in spring, summer and autumn are well suited to deer. Deer prefer a mixed diet of grazing herbs, legumes and grasses (without endophyte). In recent years, grazing herbs (chicory, plantain) have become a valuable inclusion in deer pastures. Chicory and plantain are both productive species that contain elevated minerals including copper, selenium and cobalt. 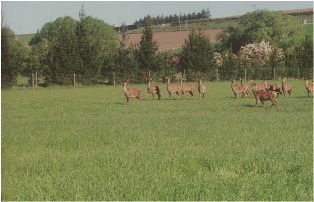 Horses are selective grazers, preferring grasses to clovers and herbs. Horses are highly active and have hard, sharp hooves that can cause trampling and thinning of pastures. Horses prefer actively growing grasses, therefore pastures should contain a higher proportion of grasses. Temperate grasses suitable for horses include ryegrass (without endophyte), prairie grass and cocksfoot. The grazing behavior of horses results in pastures that are grazed short in some areas of the paddock with other areas left tall and rank. Areas where dung has been deposited are particularly avoided for six months or longer. Cattle can be used in conjunction with horses to help even out pastures. Manure patches can be spread out using harrows which will speed up its breakdown and reduce patchy grazing.

Goats are similar to deer and tend to browse pasture rather than gnaw or pull. Goats are the least fussy of all livestock and often graze the least common plants in the paddock. They are well recognised as being able to control problem weeds. Goats graze taller plants such as grasses and often leave behind clovers; often resulting in clover dominant pastures. Pasture mixes for goats should contain a high proportion of grasses, herbs and a smaller amount of clovers or lucerne.

Alpaca and llama are softer on pasture than most other livestock as they browse plants. Alpacas have pads on their foot that reduces compaction and trampling. They are less selective grazers than sheep, and do not use their tongue to harvest and pull pasture like cattle, alpacas do however graze pastures in patches. Similar to horses, alpacas and llamas deposit dung in distinct patches in the paddock, that can result in spoiled pasture with large amounts of nutrients concentrated in one area of the paddock. Alpacas and llama pastures should ideally contain approximately 20% fibre. This can be achieved by a good balance of grass, clover and herbs. 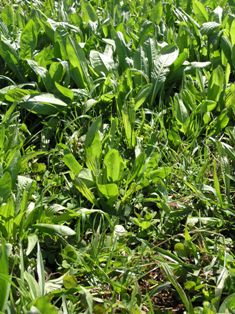 The addition of grazing herbs (chicory, plantain) to a pasture mix can increase production and mineral (cobalt, copper, selenium) levels.

Ostrich and emus are opportunistic feeders, in that they choose the best quality feed on offer. Ostrich and emus regulate body temperature in winter by increasing energy intake. This is done by eating larger amounts of feed. Pastures that are productive throughout winter and of high quality best suit ostrich and emus. These species include ryegrass, praire grass, white/sub clover and grazing herbs.

Ideally you will know what livestock you want to graze on your farm and therefore you can match your pastures to your desired livestock enterprise. If you are undecided on your livestock enterprise or have a mix of livestock types you can sow a well balanced pasture that will cover a wide variety of livestock enterprises. Apart from the livestock that are going to graze the pasture, the soil type, fertility and pH, should all be considered. Well ahead of planting a pasture, a soil test should be conducted. Click here, to view A Small Farmers Guide to Soil Testing. Rainfall, general climatic conditions along with intended fertiliser and grazing management should also be clearly identified before deciding on the pasture of choice.

Information contained in this article has been adapted from Pasture and Forage Plants for New Zealand 2006, by Dr Deric Charlton and Dr Alan Stewart.